While Body & Soul, Longitude, and Electric Picnic tend to receive the most publicity of the music festivals that happen in Ireland every year, it is important not to forget about Indiependence Music and Art Festival that takes place every August bank holiday weekend in Mitchelstown, County Cork. Smaller than many of the other festivals that happen around Ireland every year, it has a relaxed feel while repeatedly citing an impressive lineup. Here is a list of six acts that this writer feels will be worth attending across the weekend. 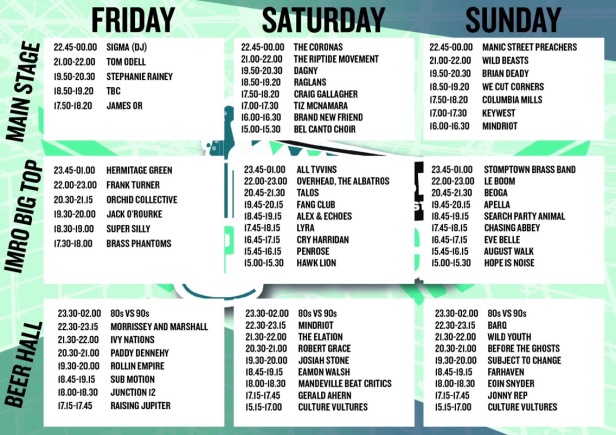 The release of the fifth album, Boy King, from this English indie rock outfit last year was heralded as one of the albums of the year with its distorted synth riffs and compressed drum rhythms. This writer was fortunate enough to catch a set by the band at last years Electric Picnic, and will be certain to do the same in Mitchelstown this weekend.

The Gaoth Dobhair native has been on this writers radar since a truly breathtaking set at The Ruby Sessions back in February of this year. A haunting voice, interesting lyrics, and delicate guitar are what can be expected when she hits the IMRO Big Top on Sunday.

These boys from Dublin are perhaps the band that this writer is most looking forward to seeing at this years festival, perhaps sentimentally as they were one of the bands that I saw at Indiependence in 2014. A stunning debut LP in 2014 was followed with a period of uncertainty from the band who would undergo personnel changes. However, the Again & Again EP, released in 2016, marked a powerful return to form and the band seem destined to go from strength to strength from here.

A band that have been featured in a post by this writer already, Hermitage Green have developed into one of biggest Irish bands on the go at the moment and the fact that they have been asked to close the Friday at this years festival is further testament to this. Known for their energetic and loud live shows, they are sure to leave everyone who sees them over the weekend thoroughly satisfied.

Another band who have already been the subject of a post by this writer, this duo of primary school teachers from Dublin are the force behind three critically acclaimed albums and are known for their energetic live shows. A must see.

Cork band, Talos, are quickly becoming one of the most exciting new bands in Ireland at the moment. Stunning live shows are a trademark of the band and anyone who attends their set over the weekend is sure to be impressed with what they see.

To anyone who will be lucky enough to be in attendance in Mitchelstown over the weekend, enjoy.