Tuesday, 11 June 2019, and the upstairs room of the esteemed and intimate Dublin music venue Whelan’s is heaving as the capacity crowd in attendance eagerly wait for the reason that they are there to take to the stage.

Fresh from a set at the renowned Ruby Sessions and the release of her debut single, the haunting and sonically compelling, Low Supply, this was a culmination of all the work that Offaly singer/songwriter Brí had done up this point in her solo music career. Low Supply is the perfect representation of what the Tullamore artist is about with echoey vocals telling the story of a friendship that has felt like all the effort was being made by one party and this has eventually become too tiresome to continue. This sentiment matched with outstanding drumming and atmospheric guitar and production make for a tack that will feature in my ‘best of’ list come December.

Shortly before 9pm, Brí (otherwise known as Briana Horan) makes her way onto the stage to begin one of the most accomplished and enjoyable hours of live music that I have seen this year. The ability to captivate an audience/listener that is shown on Low Supply was apparent again immediately in Whelan’s as the songwriter opened her set with a solo guitar performance of If You Only Knew, before inviting her excellent backing band up on stage to create a full and wonderful sound that would develop as the show progressed. It is important to pay credit to the members of this outstanding backing band that Brí assembled for this show, consisting of Aidan Mulloy (lead guitar), Kaitlin Cullen-Verhauz (cello and backing vocals), Jake Richardson (keys), Ronan Quinn (bass), and Thomas Gibbons (drums).

One of the most impressive parts of the show was the variation on the setlist across the night with the Offaly artist alternating between heavy and atmospheric tracks like Crimson and dancey songs like the fantastic, False Freedom – which is a song I massively look forward to seeing and hearing more of. This helped to keep a freshness to the show, and keep the crowd guessing what was to come next. It also stood as a testament to the versatility of Brí as a songwriter.

There is something extremely likeable about watching Horan on stage, demonstrated by a warm sense of humour and effortless affinity with the crowd in attendance. All this helped to develop a sense of a connection between crowd and performer that cannot be manufactured artificially. 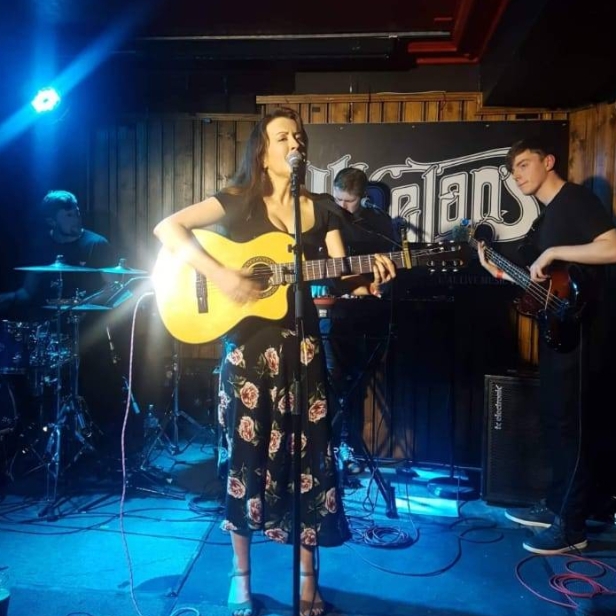 Mention must also be paid to the fantastic support acts on the night, Amy Naessens and Eoin Martin, who wonderfully set the scene for what was to follow. Both artists even joined Brí on stage midway through her set to perform a beautiful cover of the stunning Maggie Rogers track, Light On.

This was another beautiful night of live music that demonstrated the closeness and togetherness that exists in the Irish music scene as up-and-coming artists are trying to make it. There was plenty to suggest that this is not the last time that Brí will play to such an audience, definitely something to look forward to.